2020 Hurricane Season - Officially the Most Active on Record

The 2020 Atlantic hurricane season is officially the most active on record with 30 named storms as of November 23. The previous record of 28 storms was set back in 2005. Storm formation occurred at a record-breaking pace with the official list of names used up by mid-September. Once names run out, the National Hurricane Center moves on to the Greek alphabet. This has only happened one other time in history, and that was in 2005.  “The Atlantic basin saw an unprecedented level of tropical cyclone activity this year. Numerous factors came together to promote storm formation, with the most impactful being the development of a La Niña pattern early in the season,” said Kevin Sharp, ICAT’s Meteorologist and Senior Modeling Analyst.

The 2020 season kicked off with the formation of Tropical Storm Arthur in mid-May, prior to the official start of the Atlantic season on June 1. Not only were there a record-breaking number of storms, but twelve made landfall in the United States. This breaks the record of nine landfalls set back in 1916. The 2020 season also had a record-breaking number of tropical cyclones to undergo rapid intensification, which is when a storm intensifies by at least 35 mph in a 24-hour period. 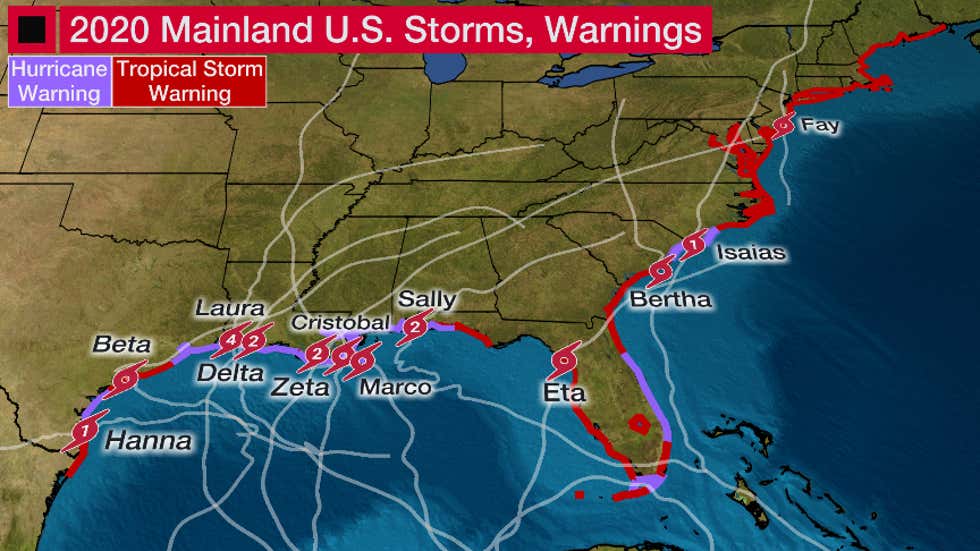 The Gulf Coast was on high alert for much of the season due to an inordinate number of storms impacting the region. Louisiana experienced a record-breaking five landfalls including category 4 Hurricane Laura, which had the strongest winds of any storm in history to make landfall in the state.

Hurricane season doesn’t officially end until November 30 and post-season activity is not unheard of, so there is still time for more storms to develop before the season is officially over. Make sure you’re prepared with an emergency plan in place and a survival kit ready to go. Check out our recent blog post on how to prepare for hurricane season for a full list of survival kit essentials.