Broomfield, CO (April 11, 2016) – ICAT has been selected as a Top Workplace in the Denver Metro area for the second year in a row.  ICAT ranked fifth among mid-size companies that were considered and received special recognition for the company’s open communication and transparency.  ICAT is a leading provider of property insurance to businesses and homeowners in catastrophe-exposed regions of the United States.

“The fact that this recognition is based 100% on feedback from our team members makes this all the more important to us, but it’s feedback we have received over and over again:  We have a great team environment at ICAT where we continually support each other,” said ICAT President Gregory Butler. “This environment produces both an employee and customer experience that continues to make ICAT a winning and growing company.”
To be considered for this award, companies were measured on several qualities including leadership, career opportunities, workplace flexibility and benefits.  Over 46,000 Denver-area individuals participated in this year’s survey, which was conducted by WorkplaceDynamics, LLP, a leading research firm on organizational health and employee engagement.  WorkplaceDynamics conducts regional Top Workplaces programs with 40 major publishing partners across the United States.

“ICAT has worked hard to build a strong culture that attracts and retains extraordinary people who contribute to delivering exceptional customer service and achieving continuous growth through innovation,” said Bruce Schnitzer, Chairman of the ICAT Board.  “Every employee at ICAT has the opportunity to turn ideas into results that improve our business and help our customers when they need it, at a time when they have suffered a loss.”
ICAT has over 200 employees and serves more than 50,000 customers in 38 states through its online quoting system, icat.com, and traditional broker submissions.  The company is headquartered in Broomfield, Colorado, and has additional offices in Tampa, Florida, and Honolulu, Hawaii.  The ICAT brand offers the promise of “Security, Service, Recovery” to policyholders and brokers in providing insurance solutions to protect against natural catastrophe events.  ICAT continues to expand through new products and geographies.

“I feel fortunate to lead such an outstanding team of people who bring passion and professionalism to their jobs every day,” Butler said.
The Denver Post published the complete list of Top Workplaces on April 10, 2016.  For more information about the Top Workplaces lists and WorkplaceDynamics, please visit topworkplaces.com and workplacedynamics.com. 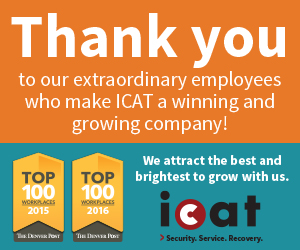 About ICAT
ICAT was founded in 1998 with the goal of helping homeowners and business owners in hurricane- and earthquake-prone regions of the United States recover from natural disasters.  Business is produced in partnership with select retail agents and wholesale brokers.

ICAT is an underwriter at Lloyd’s of London through ICAT Syndicate 4242, rated “A” (Excellent) by A.M. Best Company and “A+” (Strong) by Standard & Poor’s. The ICAT Syndicate 4242 has been a top performer in the Lloyd’s market over its seven years of underwriting at Lloyd’s.  The company also underwrites on behalf of other U.S.-based insurance companies and other syndicates at Lloyd’s of London.  Boulder Claims, a subsidiary of ICAT, has successfully managed more than 12,000 catastrophe claims since its founding in 2005, including those from Hurricanes Charley, Frances, Katrina, Dolly, Ike, Isaac, and Sandy. For more information, visit icat.com.